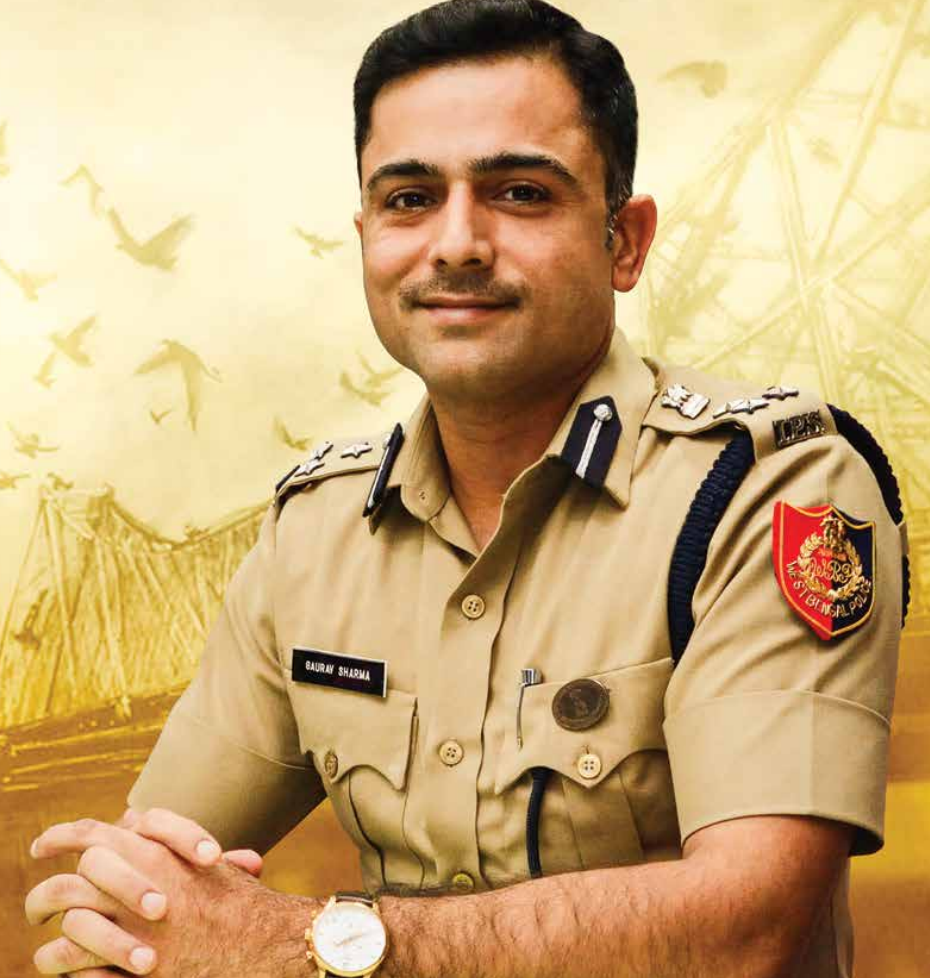 One of West Bengal’s best-known police officers, Howrah Police Commissioner IPS Gaurav Sharma chats up with The Soothsayer and touches upon the challenges of working in an old city like Howrah and the immediate measures that have been adopted to combat child and women trafficking, acid attacks and cybercrime. Excerpts:

Q1. A Chartered Accountant by qualification, what made you think of joining the public service sector. You must have given a thought appearing before the IPS entrance exam.

Firstly, no other field can give this diversity of opportunities what public service provides. I have grown up seeing my father who was also into the government sector. I gave it a rational thought as to what could be the consequences if I was unable to clear the UPSC which is considered to be one of the toughest exams in India. Strong educational background is also very important. Basically, I am a Chartered Accountant by qualification and an IPS officer by profession. I think my professional qualification pays me well and I’ve been able to nurture my childhood aspiration to serve people and contribute to society.

Q2. Howrah is an old and congested city. The congestion occurs due to narrow lanes, innumerable bridge connectives and ferry services.

Howrah is even older than Kolkata. If you see all the three bridges connecting Kolkata to the mainland, they pass through Howrah via Vidyasagar Setu, Rabindra Setu and Nivedita Setu. From that perspective, whatever happens, in one way or the other, affects Howrah and vice-versa. We have that umbilical relationship with the main city and therefore, we share its problems too.

Running traffic system is a major challenge. As the Commissionerate steps in, things have evolved very strongly, lots of issues and concerns have been immediately addressed. If you review the past six months data, Howrah police have topped in reducing fatal road traffic accidents and this has to be continued.

Q3. The rise in the number of cybercrimes in the semi-urban areas is a big challenge for the cops. How do you plan to tackle this new virtual enemy?

Of course! The nature and character of the crimes are changing every day. In 1960s or 70s, people used to carry guns in hand and commit dacoity. Now, even for very less money, criminals take so much risk and it is not a lucrative proposition any more. Connectivity has increased; information is easily available and accessible. Blue-Collar crimes have taken over completely which include harassing or stalking people online, hacking their accounts, morphing their pictures or financial crimes like bank frauds. We have a strong team of the cyber cell but having that itself is not enough. Now, each one must develop themselves as cyber police personnel and solve cybercrime issues efficiently.

A new generation of tech-savvy police officers are also well-equipped in this matter and are using updated software and new techniques. I am hoping to add adequate tech-related improvisation as a new area of investigation.

Q4. How do you deal with acid attack crimes?

The core we deal with is the prevention of acid attack. For that, we must check the availability of the acid in the market. I have a DEV wing where I discuss only two things — acids and tobacco. These are two strong areas I focus on to check whether this is legal or illegal. If it’s found to be illegal, we then take the strongest possible action.

Q5. How can crimes like human trafficking be restricted?

Human trafficking is a major issue and a big challenge for any law and order agency. The government-backed projects such as Kanyashree Prakalpa and Swayangsiddha have worked wonders and restricted trafficking in different parts of the state. Through this scheme, the entire West Bengal Police Force is spreading awareness about the trafficking of women and children and child marriage and how to prevent them. Rehabilitation is also ensured for trafficked women. The project aims to boost the response mechanism to acts of violation of rights to build safe communities while the other part is about strengthening the access of the vulnerable groups to schemes and entitlements on education, training livelihood and food security.

Q6. What has been the feedback from ‘Safe Drive Save Life’ campaign?

From the police point of view, the traffic wing was the most neglected before the campaign started. But now, the scenario has changed. We have created a high-tech system along with CCTVs, red-light violation detection cameras, number plate detection cameras, night vision devices and the like