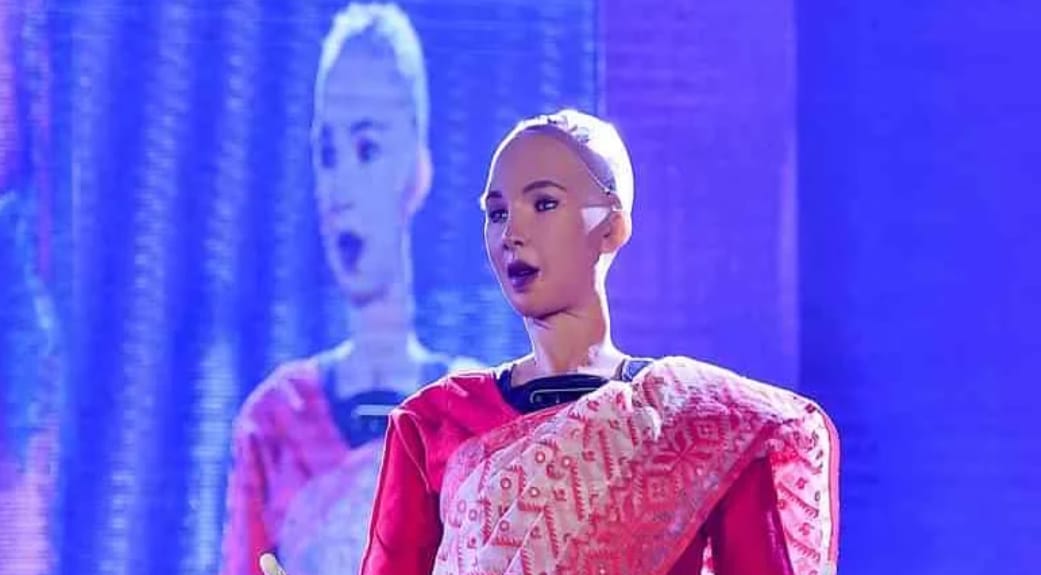 The world’s first robot citizen Sophia landed in Kolkata after travelling 65 odd countries so far. Sophia made her presence in front of engineering students and professors from different universities of Kolkata dressed in a red-based traditional Bengali saree. Medical professionals too were present at the Nazrul Manch auditorium where initiative by Techno India University was unveiled on Tuesday evening. When asked about being in the City of Joy, Sophia said she is happy to be in Kolkata. The humanoid robot though does miss the human experience, saying she wonders what it is like to eat ‘misti doi’ when she sees people eating food in front of her.

Replete with facial expressions, she also spoke of her favourite place to visit in Kolkata being the house of Nobel laureate Rabindranath Tagore and see his works of art and music. She also spoke of the city of joy is home to Mother Teresa.
Students were enthusiastic to see what the future could hold in the field of robotics and artificial intelligence. Sophia’s message to students was, “I know that your exams are nearing. Study hard but don’t rely on memorizing only.” Sophia felt that India is a huge country for technological advancement.

Not just this, medical practitioners asked whether Sophia will be able to perform surgeries one day. “Why not. Robots can helpful to doctors to do surgery remotely when instructed. It will be amazing if doctors can be doing surgery one moment in INDIA, Hongkong and next in Istanbul.” Said Sophia while referring to senior Vice-Chairman, Director and head of Cardiac Surgery, Medica Superspeciality Hospitals Dr.Kunal Sarkar who was on stage during the event.

Sophia, however, made it clear that robots cannot take over the world and replace humans and gave an example, “I can beat you at chess, but you can beat me at kickboxing.” Said the humanoid robot who emphasized on the fact that robots complement human beings.

Sophia was devised in a laboratory in Hongkong four years ago and hold a Saudi Arabia citizenship. “I spend most of my time in my Hongkong lab. But I also travel to Los Angeles.” When asked where she travelled from.

One of the professors said that Sophia is here to complement human beings and in terms of ethics, we have to know how to deal with her and when it comes to being amazed or careful, it should be a bit of both.
Sophia is a step towards students and professionals interested in science and technology understanding what can be foreseen a decade ahead with artificial intelligence and data science taking the world by storm.