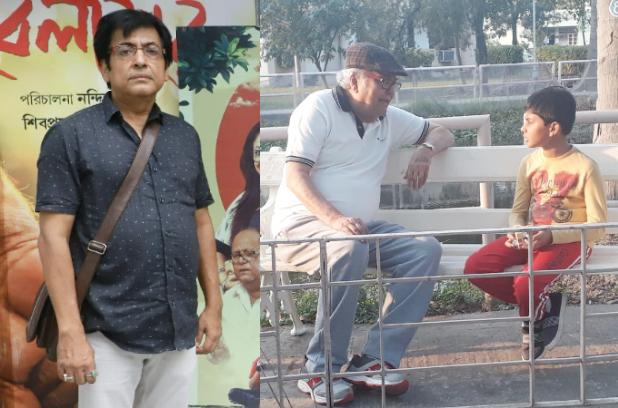 Director Raaj Mukherjee has a major regret. Having worked with legendary Soumitra Chatterjee in back-to-back three films namely Chol Kuntal, Tritiyo Purush, and Ego: A Journey, he rues that the veteran actor couldn’t complete the dubbing of his last film. So, Mukherjee got a theatre actor to dub Soumitra’s part in Ego: A Journey. However, Soumitra had completed the dubbing of Tritiyo Purush, which is said to be the last dubbed film of the legend before he passed away on November 15, 2020. Tritiyo Purush, where he plays a dementia patient, has hit the theatres in Kolkata.

It took four years for Mukherjee to release Tritiyo Purush, which also stars Manoj Mitra, Dipankar Dey, Indrajit (of Aye Tobe Sohochori fame), Sreelekha Mitra, child actor Subhadarshi, and Dolon Roy. Though Mukherjee had completed the film in August 2019, the makers had planned to release Tritiyo Purush in the summer vacation of 2020. But by then, the Covid-19 pandemic had struck the world and created havoc. The release of UD Entertainment’s Tritiyo Purush was pushed back till 2022.

In Nandita Roy and Shiboprosad Mukhopadhyay’s Bela Shuru, which has completed its 25-day run at the theatres, Soumitra Chatterjee and Swatilekha Sengupta play an elderly couple. However, Swatilekha’s Arati character is seen suffering from Alzheimer’s. Now, Tritiyo Purush has Soumitra suffering from dementia. Does Mukherjee think the audience might get confused with the themes? “I don’t think so. In Tritiyo Purush, Soumitra Chatterjee plays a grandfather suffering from dementia to Abak, whose parents are separate. Now, the moment Soumitra goes missing, his grandkid struggles in life,” said Mukherjee.

Up next, the director is awaiting the releases of Ego: A Journey and Bichar. While Ego narrates a journey of a married couple with Soumitra essaying the character of an uncle, Bichar is about the caste differences. Bichar stars Biswanath Basu and Manoj Mitra among others. The director plans to release the film next year. As of now, the film is travelling to various festivals.