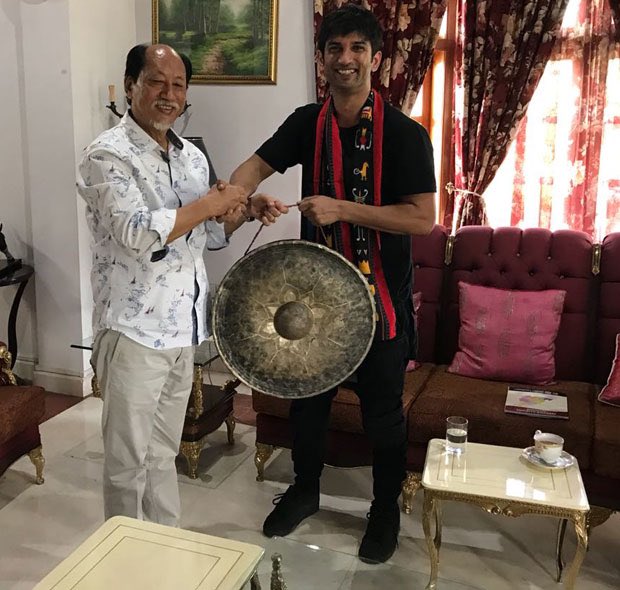 The people of the mountain roped state of Nagaland faced their worst nightmare in the year 2018 when almost 13 per cent of the state population was ripped apart by the worst monsoon. More than 500 villages were flooded and approximately 50,000 families were displaced.

When the flood fury devastated the lives of the people of Nagaland then one man stood beside them like a true protector. He was none other than Sushant Singh Rajput, the 34-year-old Bollywood star who committed suicide allegedly due to acute depression in his Mumbai residence on 14th of June Sunday.

Sushant extended his help to the people of Nagaland during the disaster and made a permanent place in the hearts of the citizens of the state. The news of his demise not only shattered the entire nation but drowned the state of Nagaland in grief and sorrow.

Not only the common populace of the state of Nagaland but the Chief Minister Neiphiu Rio, recalled his kind deeds for the state. The Himalayan state mourns the untimely demise of the actor who stood by them when they need him the most.

Way back in September 2018, the actor contributed Rs 1.25 crore to Nagaland, then hit by floods and landslides. He even visited the state to make a personal contribution to the Chief Minister’s Relief Fund. Nagaland Chief Minister Neiphiu Rao tweeted about it while condoling the actor’s death.

Shocked & saddened to hear about the untimely demise of Sushant Singh Rajput. He handed over a cheque to me when Nagaland was affected by floods & landslides in 2018. His love & generous contribution to the people of Nagaland will always be remembered. May his soul RIP pic.twitter.com/KQ5EHl5K2K

Bollywood actor and television star Sushant Singh Rajput was found hanging from the ceiling from his residence in Mumbai on Sunday.

Abu Metha, an adviser to the chief minister too condoled the demise of the actor.

“Sad to hear the shocking news of #SushantSinghRajput’s demise. Fantastic actor& a kind soul, a friend of Nagaland. He visited us during natural calamities&generously contributed. RIP & ThankYou for the fun&joy u gave us. Pictures of his #Nagaland visit with @Neiphiu_Rio.”

Leaving behind his legacy of generosity, Sushant Singh Rajput became immortal for the people of Nagaland; for him, the late actor was a source of inspiration who stood by them during the hour of difficulties.

Sushant Singh Rajput had shot to fame with the TV serial Pavitra Rishta on Zee TV, produced by Ekta Kapoor. However, his debut film was Kai Po Che, directed by Abhishek Kapoor, an official adaptation of Chetan Bhagat’s Three Mistakes of My Life.

He was also featured in Yash Raj Films’ Shuddh Desi Romance and a small role in the Aamir Khan-Rajkumar Hirani blockbuster PK. Sushant then earned critical acclaim for his portrayal of iconic Detective Byomkesh Bakshy. However, his career’s biggest hit came with MS Dhoni: The Untold Story, in the role of the former Indian cricket captain.

He also bagged the role of Mansoor in Kedarnath, featuring the debutant Sara Ali Khan. His role in Director Nitesh Tiwari’s Chhichhore in 2019 was discussed and remembered even after his death. He was last seen in the Netflix film Drive and was working on Dil Bechara, the adaptation of the Fault in Our Stars.