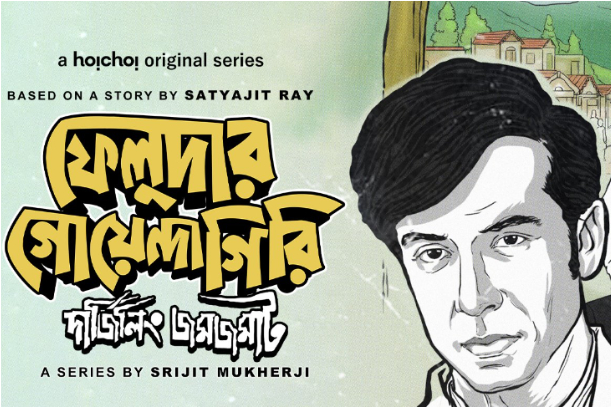 Finally, the wait is over. The trailer of Feludar Goyendagiri – Darjeeling Jawmjawmat is out. Yes, Srijit Mukherji’s upcoming web series on our favourite detective.

Ever since the Feluda fans learnt their sleuth is coming on Hoichoi, they flooded director Srijit and actor Tota Roy Choudhury’s timeline on social media asking them the release date of the series. So, finally the makers have unveiled the trailer and the Feluda fans have something to feel nostalgic about after watching it. Also, here’s another good news. Feludar Goyendagiri – Darjeeling Jawmjawmat starts streaming on Hoichoi from June 17.

Starring Tota as Felu Mitter, Kalpan Mitra as Topshe and Anirban Chakrabarti as Jatayu, Srijit brings the popular story of Feluda’s Darjeeling Jawmjawmat to life. The series also stars including Suprobhat Das, Lokenath Dey, Shaheb Bhattacharya, Rahul Banerjee, Subrat Dutta, Barun Chanda, Pushan Dasgupta, Manab Chowdhury, Mainak Banerjee and Indrashish Roy in pivotal roles. The show tells the story of Feluda, who along with Jatayu and Topshe, goes to Darjeeling to solve an intriguing case, dealing with the sudden disappearance of a priceless idol, followed by a gruesome murder.

Just like any other Bengali, for Tota, too, Feluda is an emotion. “Playing Feluda on screen is truly an honour, and as an actor, I was ecstatic to essay the role. I thank Srijit Mukherji for this opportunity,” he says. By now, Tota is used to playing Feluda but he admits getting into the character was again a ‘challenge’. “Entering the headspace of Feluda was a challenging yet a joyous experience. I sincerely hope that I’ve been successful in embodying the character, for our audience. Feludar Goyendagiri aims to entertain the audiences and at the same time, it remains authentic to the storyline of Satyajit Ray,” he says.

It’s an open secret that the National Award-winning filmmaker, Srijit, has always wanted to recreate Feluda on screen. “Feluda’s stories are something I’ve wanted to create for a long time, but I wanted to take my time with it. Feluda is something that Bengalis all over the world are extremely protective about, as am I and I wanted to do justice to it. Which is why we adapted from already existing well-crafted tales about Feluda. The entire team has put its heart and their best efforts into the project and I sincerely hope that the audience loves watching it, as much as we enjoyed making it, if not more,” he says.