Towards a SMART(er) Nagaland 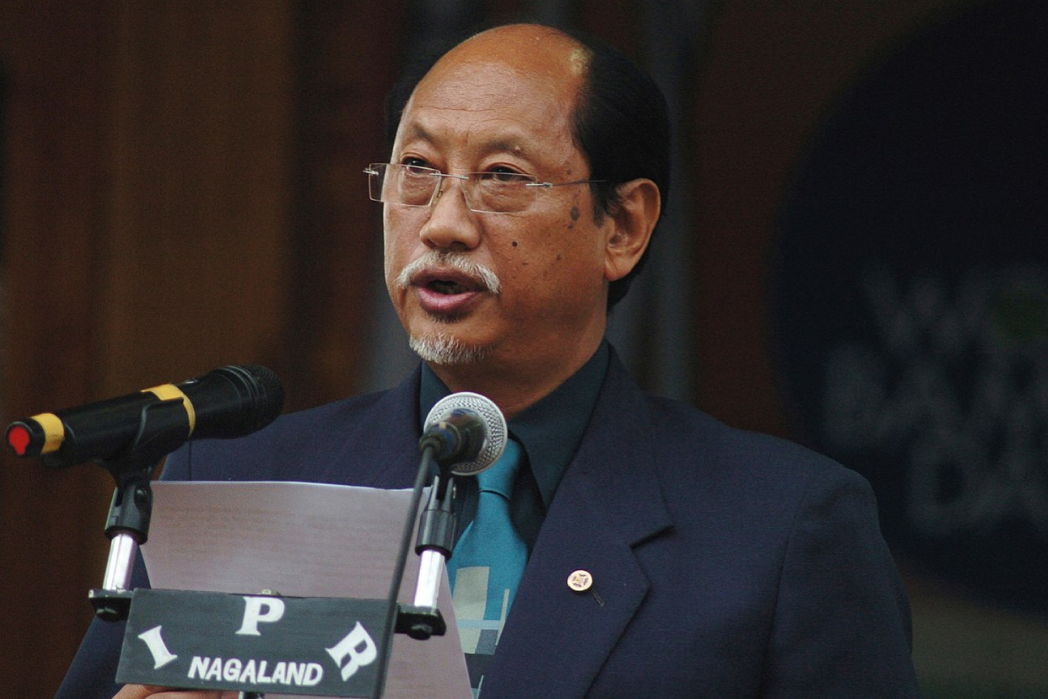 Nagaland has been one of the frontline states in the implementation of e-governance policies and projects in India. With the National E-Governance Service Delivery Assessment (NeSDA) rating it as one of the most e-prepared states amongst the North-East, the Nagaland government has adopted innovative and progressive policies for the promotion of the same. Talking about the achievements, Nagaland Chief Minister Neiphiu Rio touches upon a series of issues that helped put the state in the top slot and also getting recognised by the NeSDA. Excerpts:

“We are trying to bring e-governance in all the departments and so far, we’re doing fine. But we have lots more to do. It is one of our commitments in the election manifesto that e-governance should reach every corner of the state and we’re trying to implement that. Many new initiatives are on and our departments are working on them.”

Nagaland is an aspiring leader with e-readiness initiatives with the IT Policy and tops the North-Eastern region.

According to the NeSDA report, Nagaland topped the list among the North-East and Hill states of India with an overall score of 0.47 while Assam came second with 0.28 and Manipur stood third with 0.23.

Meanwhile, following its digital footsteps Haryana and West Bengal were among the top six in NeSDA, according to the survey on state-wise assessment of e-governance services to businesses and citizens.

While Haryana stood at the third position, West Bengal secured the fourth position.

Digital governance holds out so many exciting possibilities that even one of India’s smallest states can see huge gains in their governance capabilities. Nagaland is increasing the use of digital tools to improve the quality of governance and their citizens’ ability to access those services.

“We’re promoting it but yes it will take some time as this cannot be done overnight,” said Rio.

For digitisation to pervade across society, some key policy measures and infrastructure need to be in place. Digitisation in tourism has emerged to be one of the most path-breaking initiatives.

“We are promoting tourism since our state is famous as the ‘Land of Festivals’. Digitalisation has provided the much-needed boost — from e-booking of hotel rooms to key information being given to visitors and tourists about Nagaland tourism.

Harnessing technology to enhance the learning experience of students, Nagaland launched its first interactive digital smart boards for smart classrooms, becoming the first state in the North-Eastern region to introduce such a facility in all the 15 government colleges. A smartboard is usually an interactive whiteboard that allows one to project an image and ‘interact’ with it by writing on it or moving it around. The smartboard is connected to a computer and works with a projector. Launched by Neiphiu Rio, this initiative of technology-enabled learning system is aimed to create an interactive environment in the classroom.

“The future is here — on the digital smartboard. The initiative will go a long way in improving the quality of education in Nagaland.”

The initiative is a step in the right direction that will make learning more interactive and engaging. In addition, teachers will be able to deliver technology-enabled dynamic and interactive lessons in the classrooms.

While internal security was always a challenge for Nagaland, it is now involving its large youth population into constructive technological revolution. Thus, the tech-savvy Gen-Next find themselves to be a key component for development. Nagaland was awarded the ‘Best performing small state in law and order’ for two consecutive years at the ‘State of the States Conclave by the India Today State of States’ Survey.

“Ours may be a small state but the youth population here is very high and everybody here is quite tech-savvy. I don’t know what the outside world thinks about us but we are a very safe state and as far as the law and order is concerned, among the smaller states, we have won an award for two consecutive years as the state with the best law and order system in place. I feel, our state is quite safe for women,” said Rio.

The government of Nagaland has taken a huge stride towards achieving transparency in its governance. The state government had, in the recent past, launched several websites, including the Chief Minister’s Dashboard where information about various government projects and schemes in the state and its progress is provided for the general public. While the government of Nagaland has come a long way in terms of e-governance, it has also covered a huge distance regarding the implementation of policies and execution of developmental projects and schemes.

“We have to take digital India as a business transformation and proactively identify opportunities in advance and invest in them before the demand actually arises.

“One of the defining attributes of the current government thus far has been its unrelenting focus on increasing its efficiency and effectiveness. The result of this focus is already visible in the progress made in various projects during the past few years. Already technology is being used — be it in attendance monitoring or other areas and amongst the budget’s many structural reforms is the focus on the targeting of subsidies to tackle the scourge of leakage and corruption in them.

Creating a technological platform for administrative and decision-making processes move governments towards a new form of responsiveness and transparency. The latter in turn should cause for less corruption and providing lesser ground for crony capitalism. Responsiveness should translate into less red-tape and more efficient environment and life for citizens. There is no hiding the fact that technology bears a direct relationship with bringing in a more efficient, transparent and accountable government and a host of other allied benefits would be accrued which includes reducing expenditure, enabling real-time data analysis and ensuring a faster movement of information and intelligence to policy and decision-makers resulting in swifter and more accurate policy-making being undertaken by the government machinery.

Governance is a term commonly used to refer to how public institutions and private companies conduct their affairs and manage resources and e-governance has taken it to the next level. It covers the process of decision-making as well as their implementation. Transparency and accountability are central to the concept of good governance. In light of this, the government of Nagaland has taken radical steps and actions to usher in an era of transparency, be it mandating all government departments to ensure updated websites, use of Aadhaar-enabled Biometric Attendance System, and interaction with citizens through social media enabling e-services. It is hoped that this push towards a digital government will also increase the transparency and efficiency of the government and allied systems.

How has Nagaland benefited from e-governance and how has this benefitted youth to get jobs and promote tourism?

Though e-governance is yet to be implemented at an enterprise level within the government set-up, the modules implemented in multiple departments pioneered by Department of IT&C through the end-to-end online systems such as the NPSC (Nagaland Public Service Commission), scholarships, Inner Online ILP has paved way for improvement in the way services are delivered to the citizens by way of savings in terms of cost and time to avail. Youths are now getting employed in the IT sector both in software development and IT-enabled services from graphic designing, app development to social media and analytics etc.

Because of IT and rapid adoption on social media, Nagaland tourism in recent years has seen a lot of improvements in terms of promoting the state as a travel destination with trending hashtags particularly on popular lifestyle-based apps such as Instagram, drawing a lot of interest among travellers to visit the state.

Tell us about various projects and activities under e-governance that your government has undertaken:

The Department of IT&C and the government of Nagaland has undertaken various projects. Here are a few:

What is the e-district project?

The e-district project is a Government of India initiative to enable various state governments to provide services through the online/digital platform. The entire business process for various government services has been made completely digital thereby increasing transparency, fixing responsibilities and also improving the delivery of services like online birth/death certificates, NPSC One Time Registration (OTR), NPSC online application for exams etc. Presently, the Government of India is conducting in-depth testing on the Nagaland e-district system for identifying sectors of improvement, enhancing better citizen engagement and overall improvement of the entire project.

The State Wide Area Network was established under the National eGovernance Plan (NeGP) in 2012. The project provided a network to 48 government offices from the state headquarter (Civil Secretariat) to all Deputy Commissioner Offices and some identified administrative blocks for video, voice and data communications. The State Wide Area Network has also been expanded to connect tax offices through the GST Network (GSTN) and is also connected to police stations for the CCTNS Project. Plans are being formulated for upgradation and enhancement of the services.

Tell us about Nagaland’s concept of SMART government:

The government of Nagaland believes in setting up of a Simple, Manageable, Approachable, Responsive and Transparent (SMART) government. To this end, the government is constantly trying to enable simple systems (digital systems like social media, websites) for information dissemination and collaboration with its citizens. The government of Nagaland has set up the Nagaland myGov Platform for active citizen engagement and collaboration, which means that the government is much more accessible and approachable than before. Furthermore, citizens’ views and concerns are being taken up on a war-footing. Through the extensive use of ICT and Digital Systems, the existing government processes are being simplified, red-tapism has been made non-existent and governance has been made manageable and transparent.

Strengthening rural governance and reaching out to the masses: What is your government doing to improve its reach to the rural sector?

The Department of Information Technology & Communication has established 310 Common Service Centres (CSCs) in both the urban and rural sectors. The CSCs are the gateways for interaction between the government and citizens. The CSCs provide easy access to all the Central and state government schemes and services and presently, the 7th Economic Census activity is being undertaken solely by the CSCs. The CSCs are also acting as banks in the remotest villages and issuing car loans and other banking services to the villagers. Furthermore, as the CSCs are established at the grassroots level, flagship schemes like PMJAY, Insurance and Finance are being implemented with better coverage and success rate.

Has your government laid any plan for tourism under digitalisation?

The tourism department’s official app was launched by the Chief Minister of Nagaland in December which has incorporated the flagship Hornbill festival and other programmes for potential visitors to get a glimpse of the various tourist attractions they can experience when visiting the state.

The Kohima smart city wi-fi that was also implemented has installed customised kiosks in the capital city where tourists can get information on places to visit, cafes, tourist destinations, emergency contacts with inbuilt QR codes to scan and directly get access to the Google Map directions to visit these places around Kohima.

The government of Nagaland, through its e-governance initiative, is doing its best in facilitating the smooth and speedy approval of ILP to domestic tourists and to streamline and remove unwanted hindrances. Thus, through digitalisation and e-governance, Nagaland is reaching out to the masses, not to mention the vast strides it is taking to promote its tourism in this part of the world.