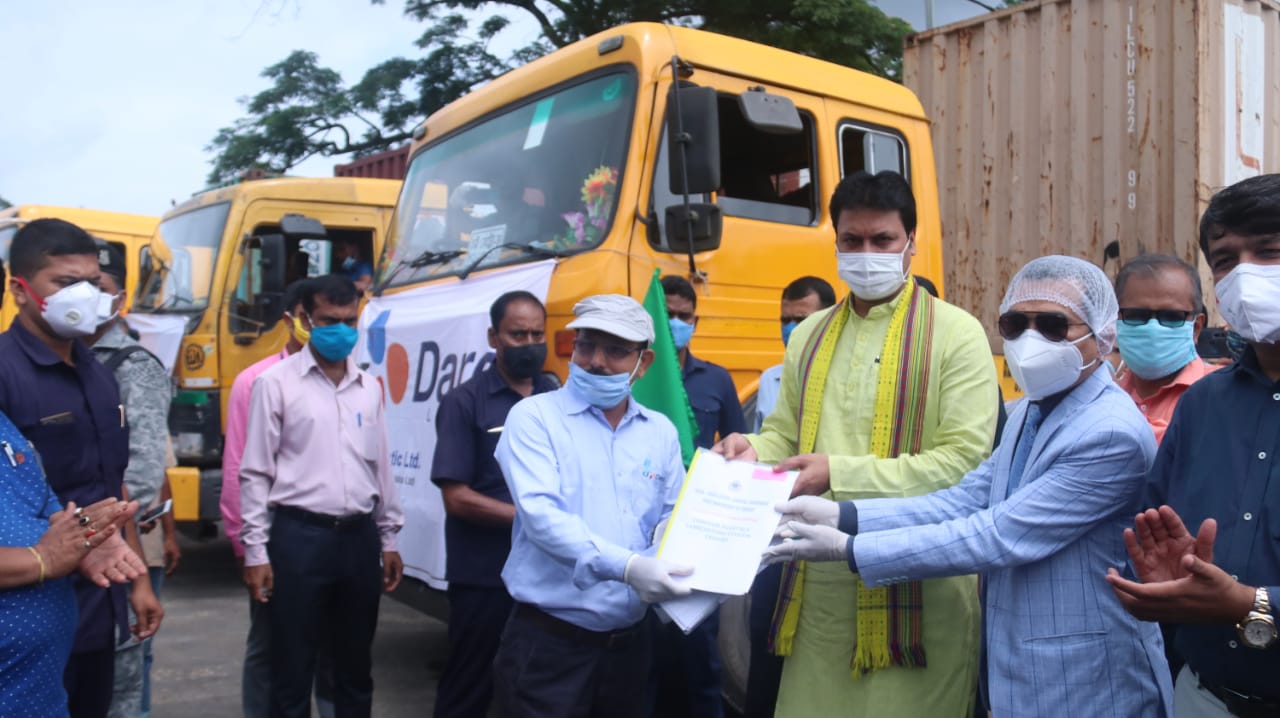 Even as COVID19 pandemic continues to thwart progress of developmental projects, state government of Tripura is leaving no stone unturned to complete the big ticket projects like Sabroom’s (southern most subdivision of Tripura very close to Bangladesh’s Ramgarh and Chittagong hill tracts) SEZ and ‘Maitri Setu’. According to the Secretary of Tripura Industries and Commerce department, both projects have great importance as far as the strategic growth of the state is concerned. Coming out of an initial impasse caused by COVID19, these two projects are now in full swing and target a speedy completion soon.

Currently, ‘Maitri Setu’ over River Feni, which facilitates Tripura’s access to the Chittagong Port, 70 Km from Sabroom, is almost ready. Sources in NH8 Engineering Cell says the project is scheduled to be completed by December 2020. On the other hand, the highly ambitious SEZ (Special Economic Zone) is still inchoate. The land acquisition being complete, the project awaits land development to start, expectedly from next week and continue till mid September.

Speaking on SEZ, Industries and Commerce Secretary, Kiran Gitte said, “After the Feni Bridge, SEZ comes as the second most important project. A little over 16 hectares of land have been earmarked and the land development process is now being initiated. Since the land is already acquired by the Department of Industries, the main job left is to give it a commercial facelift.”

“We will soon begin the work of building a boundary wall and the entire area will be fenced. With rupees 4 crore already allotted for boundary wall, TIDC (Tripura Industries Development Corporation) is now looking for investments to ensure aspects like electricity, roads and other infrastructures in the SEZ. Hopefully, the project will be ready on time,” added Gitte.

He also told The Optimist that as soon as the Feni Bridge gets complete, trade will begin through LCS (land custom station). A proposal for ICP ( Integrated Check Post )is in Delhi and an approval for land acquisition is expected soon. A DPR (Detailed Project Report)  is being also drawn up for the project.

In September, a team of industrialists is expected to meet Chief Minister Biplab Kumar Deb and if talks go the right way, might visit Sabroom to inspect land for purchase. The team has been invited by the state government to avail facilities of SEZ in Sabroom.

Reportedly, an additional 200 acre plot has also been allotted to East Lodhua. According to Sabroom MLA, Shankar Roy, “If further expansion of SEZ takes place, additional land will be required. The East Lodhua plot is allotted for that.”

Initiatives are also being taken to start trans-border travel and in doing so, 10 acres land for a bus terminal and 31 acres for a truck terminal have been allotted. “With an easy route to Bangladesh now a reality, we have decided to begin bus services to Cox Bazar and Chittgong”, informed Roy.

According to Transport Secretary L Darling, talks are also on with the Railways to develop a goods-yard. “Since the 2,800 metres Sabroom railway station is the longest in the North East, there are ample scopes for developing a goods yard here. As connectivity improves, industrial setups will be built and railways will never run into losses. We have forwarded a proposal about this plan through the Transport department of Tripura”, said Darling.

Sabroom MLA, Shankar Roy, is toiling day and night to see his constituency flourish as an economic pivot of the state. Speaking on the issue, he said, “COVID19 has played the spoilsport or the situation of Sabroom would have been different. However, we are now looking forward to a bright future. Despite being hit by the pandemic, work is on to minimise delay in the progress of the project and to complete it by next one year. We are expecting to see Sabroom with a new face next winter”.