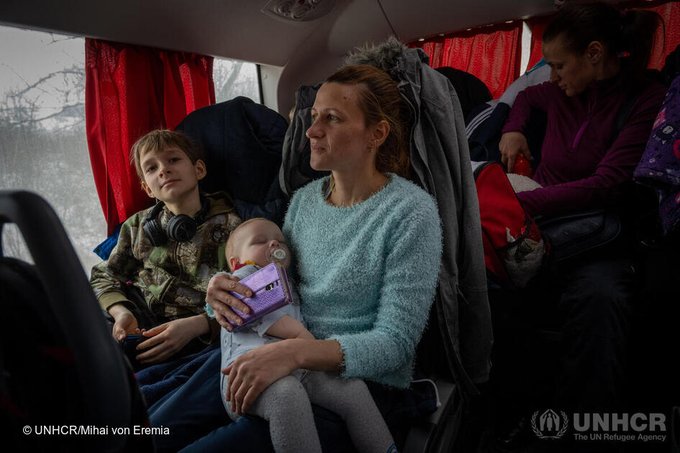 New York: Ongoing violence in Ukraine has left millions of people “in constant fear” of indiscriminate shelling, the UN warned on Friday, amidst mounting alarm over Ukraine casualties and desperate scenes emerging from Mariupol. Efforts to reach the country’s most vulnerable populations, one month on from the Russian invasion, continue.

More than 3.7 million people have fled the country, but “some 13 million people are estimated to be stranded in affected areas or unable to leave due to heightened security risks, destruction of bridges and roads, as well as lack of resources and information on where to find safety and accommodation,” said Karolina Lindholm Billing, UN Refugee Agency (UNHCR) Representative in Ukraine.

Speaking from Lviv, Ms. Billing added that millions of Ukrainians “live in constant fear of indiscriminate shelling and heavy bombardment”, amid the systematic pounding of cities, towns, hospitals, schools and shelters that has forced them to shelter in bunkers, day and night.

With long-established roots in assisting Ukraine, UNHCR’s current focus inside the country is to provide immediate relief to those fleeing the war, by providing protection, shelter, emergency cash and in-kind assistance.

UNHCR teams and local partners have been deployed at border points, in transit and reception centres, too.

“The UN has continued to push to reach populations at greatest risk “in eastern Ukraine, in Kharkiv, Donetsk, Luhansk oblast, as well as in the south, Kherson and Kiev”, the UNHCR official explained.

“They are blocked in these areas that are encircled or where the roads are now inaccessible, due to mines and, for example, burnt-out vehicles. This has been one of the reasons why it’s so difficult to get to Mariupol.”

The WFP also warned that situation is more desperate than ever in the southern city of Mariupol which has been subject to constant Russian shelling.

“The encircled city of Mariupol is running out of its last reserves of food and water,” said Mr. Phiri. “No humanitarian aid has been allowed into the city since it was encircled on 24 February. The only way to reach Mariupol is through humanitarian convoys which until now have not made it through.”

All the while the civilian death toll continues to rise, said the head of the UN Human Rights Monitoring Mission in Ukraine, Matilda Bogner.

“The overwhelming damage and destruction is being done by weapons – explosive weapons – with wide impact areas,” she said, speaking from Uzhhorod in the west.

“The attacks are happening on a daily basis and this is what the civilian population is suffering from, because they are being used in populated areas.”

Ms. Bogner said that the death toll and human suffering in cities, towns and villages across Ukraine was increasing “day after day” and that the indiscriminate nature of the attacks – in which the use of cluster munitions by Russian forces has been confirmed, and potentially by Ukrainian forces also – were potential violations of international humanitarian law.

Since Russian armed forces launched their attacks on 24 February, at least 1,035 civilians have been killed and at least 1,650 injured, The UN rights office official said, adding the caveat that the figure “is likely much higher in locations that have seen intense fighting, in particular Mariupol and Volnovakha…If we look at Mariupol, clearly the number of deaths of civilian casualties there is significantly higher.

“We are trying to look into the scale, we have”, adding that they are get more information “on mass graves that are there.”

Since February the UN and partners have delivered over 2,700 tonnes of food and medical supplies and over 1,100 tonnes of water, sanitation and hygiene items.

People on the move have also received essential advice via hotlines, and another 5,500 tonnes of supplies are already being distributed or are on the way.

“WHO, along with certain colleagues from OCHA, arrived in Dnipro about 48 hours ago to further strengthen and build an operational capability in sort of the central east of the country. The purposes of us doing that is very much to get closer to the people who are in greatest need of lifesaving humanitarian assistance.”

The UN has launched two coordinated UN emergency appeals calling for $1.7 billion to help people across Ukraine and beyond. Within Ukraine, $1.1 billion is needed to meet escalating humanitarian needs of more than six million people affected and displaced by military operations over the next three months. The appeal is currently around 40 per cent funded.

Outside the country, more than $550 million is required to help Ukrainians who have fled across borders, principally to Poland, Hungary, Romania and Moldova.