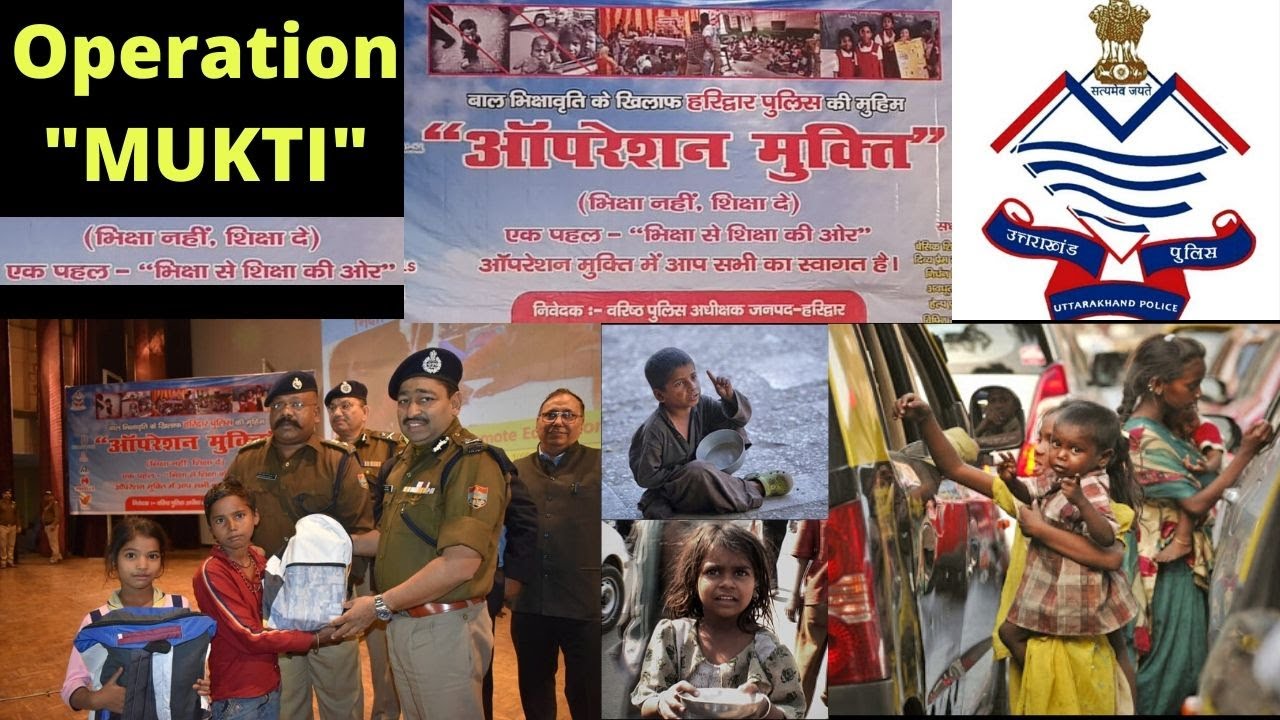 The Uttarakhand Police had started a campaign named ‘Operation Mukti Abhiyan’, a campaign aimed to motivate children and their families to choose education over begging. The campaign has been conceptualized by DGP Ashok Kumar, IPS.

“It is our collective failure that despite being so progressive and civilized as a nation we are not able to secure a proper atmosphere for our children to educate themselves and play. We are denying them the opportunity of a bright childhood which plays an important role in the growth of any human being,” said DGP Kumar in a Facebook interactive session in 2019.

“When we give alms to children we think that we are doing something noble. However, in reality, we are doing just the opposite. This is because the parents see this as an income earned by the child and get further motivated to engage them as beggars. Forcing someone to beg is a criminal offence and parents of such children can be prosecuted by law. However, that does not solve the problem,” he added.

Operation Mukti intends to change the prevailing mindset we have about giving alms. Instead of paying some money to the little children and staying aloof from the problem we should take steps to provide them with education. Hence the slogan, “Bhiksha Nahi, Shiksha Do.”

Working on the program

“The program was taken up in Dehradun as a pilot project in 2017. Then it was extended to Haridwar as well. Now it is being carried out in the entire state,” said Shweta Choubey IPS, SP Law and Order Police Headquarters, Uttarakhand and also the nodal officer of this Mission.

In the first phase, the Anti-Human Trafficking committees were operationalized in every district. They identified the youngsters who were begging, selling balloons, or were involved in similar activities in different pockets of the cities.

In the second phase, the schools in which they could be admitted based on the locality were identified. “We have coordinated with the local education officers and the local NGOs so that these children can get admission in the schools,” Sweta Choubey IPS mentioned.

Presently, in the third phase, almost 350 children are getting admitted in different schools in the respective areas. As part of the awareness campaign, many ‘Nukkad Nataks’ (Street Dramas) were also organized to sensitize people about this issue.

On account of the pandemic, many of the schools are not operational. This has proved to be a hurdle for a seamless admission procedure. Previously, the children were seen to be studying at schools. They were also receiving books and study materials. However, that is not the case now due to the prevailing uncertainty. To counter this, various small teams of police officers had set up several pathshalas at various places like Haridwar so that kids may continue their learning process and not slip back into begging.

However, convincing the parents of the children is challenging at times. “These children act as a help for their parents in securing some extra income for the family. Hence they resist at times. So we provide them with counseling sessions to make them understand how the education of their children will empower them. In the last phase we had also imparted skill training to the parents so that they can earn a better livelihood,” added Sweta Choubey IPS.

The Uttarakhand Police is doing a commendable job in changing societal mindset about begging, convincing parents about their children’s better future and orienting the kids in the right direction. These efforts, done in earnest, can be a harbinger of a better world for children and society at large.