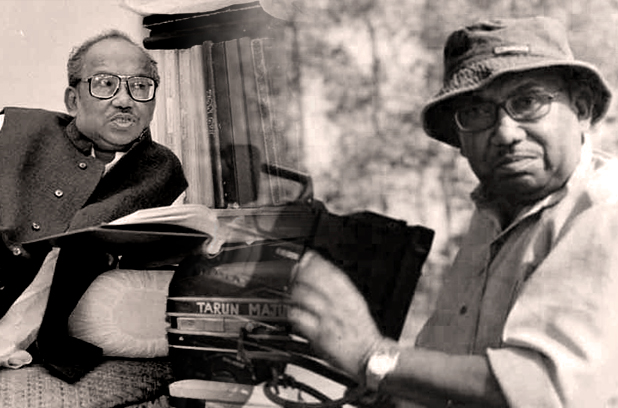 Veteran filmmaker Tarun Majumdar, who is known for delivering memorable films like Balika Badhu (1967), Ganadevata (1978), Dadar Kirti (1980), Shriman Prithviraj (1973) and Bhalobasa Bhalobasa (1985), has passed away on Monday at 11.17 am at SSKM hospital in Kolkata.

The 91-year-old Padma Shri awardee was admitted to the state-run SSKM Hospital on June 14, where he was undergoing kidney and heart-related ailments. However, on Sunday night, his condition deteriorated and he was put on ventilation support.

For Rituparna Sengupta, the loss of the austere director came as a shock. In fact, the actress was anxious when the legendary director was in the hospital for the past few weeks. Tarun Majumdar had gifted her Alo in 2003, the Bengali film based on the story of Kinnardal by Bibhutibhushan Bandopadhyay, which ran in theatres in the state for eight months. Later, the actress again worked with him in Chander Bari (2007) and Bhalobashar Bari (2018).

“I can’t even imagine he is no more. He is a pillar of Bengali cinema, an institution. The way he depicted love, family values and social messages in his films is beyond comparison. I have seen him from closed quarters. I feel privileged that I could work with him in three of his films and all of them have been appreciated by the audiences. I did Alo, Chander Bari and Bhalobashar Bari with him. Alo is a landmark film in Bengali cinema. Till today, I am asked if another film like Alo can be made ,” said Rituparna.

Satabdi Roy, who worked with Majumdar in Parashmani in 1988 and Apan Aamar Apan in 1990, remembered how fun loving the director was. “Of course, he was a filmmaker par excellence. But Tarun da was also a jovial person and had a terrific sense of humour. I remember the adda sessions with him at NT1 studio in Kolkata. The way he depicted love in his films was something else. It’s a huge loss for the Bengali film industry,” she said. Parashmani also starred Tapas Paul with whom Majumdar has done many memorable works notably Dadar Kirti, Apan Aamar Apan and Bhalobasa Bhalobasa.

In fact, Majumdar is credited for introducing new talents to the film industry namely Moushumi Chatterjee, Tapas Paul, Mahua Roychoudhury and others.

Soumili Biswas never forgot what Majumdar told her during the shoot of Alo. “It was Tarun Majumdar who was instrumental in bringing me into films. He was no less than a father figure to me. Working on Alo was like going back to school. He is an institution. At the end of the shoot, he told me never to leave acting,” said the actress.  Majumdar had received Padma Shri in 1990 and has five Filmfare awards to his credit.

Singer Arundhati Holme Chowdhury had sung Rabindra Sangeet in several of his films. Having worked with him in Dadar Kirti, Bhalobasa Bhalobasa, and Alo, she said, “He knew really well how to use songs in his films, especially Rabindra Sangeet. The placement of songs mattered to him the most,” she recalled.