Walking The Path of His Dream, IPS Officer Saurabh Tolumbia Has Come A Long Way 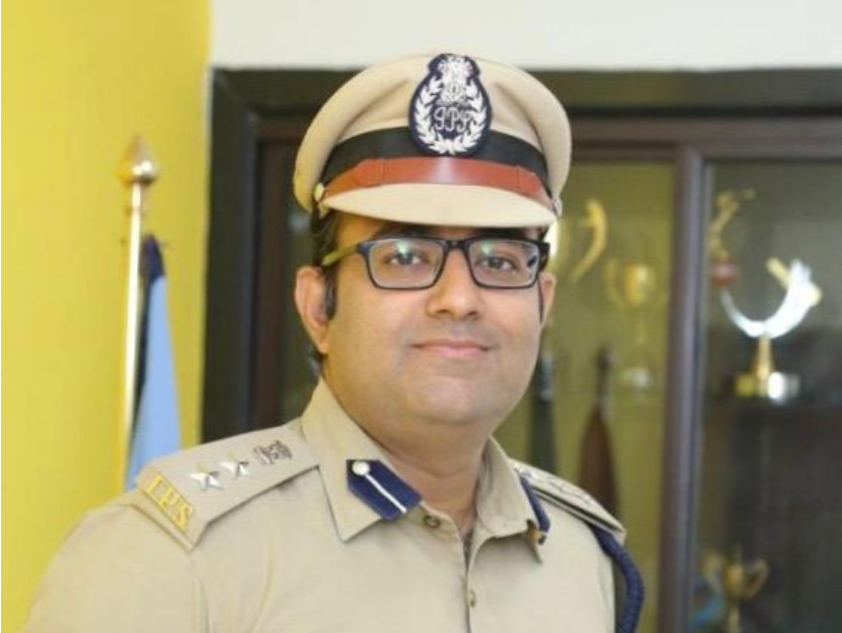 “Blessed are the peacekeepers, for they shall be called the children of God.” This is who the Police are, to many citizens. This is probably one of the reasons that many are lured into the Indian Police Service(IPS ) like officer Saurabh Tolumbia who is the Superintendent of Police ( SP ) Kutch, Bhuj in the state of Gujarat. SP Tolumbia, one of the youngest IPS officers, talks to The Optimist News on his journey to don the Police uniform.

The Moment Of Trigger:

SP Tolumbia, who hails from a middle class family of Jodhpur in Rajasthan, narrates a memorable story from his childhood during the festival of Dusshera, which inspired him to consider being a Police officer. “One of the major incidents was when I was 8 or 9 and I went with my father for a Dusshera event in Jodhpur. While all were waiting for the Ravana effigy to be burnt, I being restless and asked my father what we were waiting for? He told me that the SP of Jodhpur will come and burn the Ravana effigy.” Narrates SP Tolumbia.

“Seeing the SP step down from his vehicle in uniform and been given a grand welcome made an impression on my mind, that we need a person in uniform to burn down evil.” Adds SP Tolumbia who went on to think over of Union Public Service Commission (UPSC) and IPS exams for the first time. SP Tolumbia always believed he should work from the frontline for people at large and for the welfare of women and child rights protection.

Bridging The Gap Between Men In Uniform and Citizens :

The Police officer believes that an era of 4G network and better internet connectivity is helping to bridge the gap between men in uniform and citizens. With the help of advanced technology, now citizens can convey their fear directly to their protectors.

“People in the country deserve better policing, better behaviour from Police personnel on duty. The current corona virus pandemic will hopefully bring Police and citizens closer and they will start trusting the Police. I appeal to people to use social media more and digital platforms too or even email senior most officer in your district when you feel helpless or in need.” Appeals the IPS officer, in hope that citizens will utilise the advanced tools of technology and connect to officers in times of need.

SP Tolumbia believes that today’s young generation of the nation are quite positive and enthusiastic while abiding by the laws, as they respect Police officers. The IPS officer also thinks that it is necessary for the Police leadership and officers to connect with today’s youth through social media and advanced technology to build a connect and facilitate two way communication.

Dealing With The Pandemic:

To save a life in an unprecedented crisis is like ‘dharma‘ or duty to SP Tolumbia, who along with his team are leaving no stone unturned to make sure that no one violates the lockdown protocol and senior citizens and women who stay alone get all the needed essential facilities at their doorstep.

“We have made a lot of public announcements through mega phones from the 22nd of March till today, to dial 100 and use our Whatsapp media group number in times of need and stay indoors all the time. There have been incidents where senior citizens and women had asked for medicines and my team of women officers had delivered it to their place. At times, I have also delivered essentials to senior citizens.” Says the Kutch SP.

For the young officer, it is quite encouraging when citizens use the police helpline number to send videos of people violating the lockdown norms which plays a role of a responsible citizen. Every evening, the Police band goes inside various residential colonies and plays the tune of the National Anthem, which is like breaking the monotony for the officer as well as instilling faith amongst residents locked up inside their houses.

Click on the link to see how police band is encouraging the residents :

SP Tolumbia believes that the sky is the limit being in the Police force. The IPS officer believes that the Police should start handling the lockdown situation more sensitively and take progressive steps in the 21st century where uncertainty looms large over people across the globe and India is facing it’s own challenges.