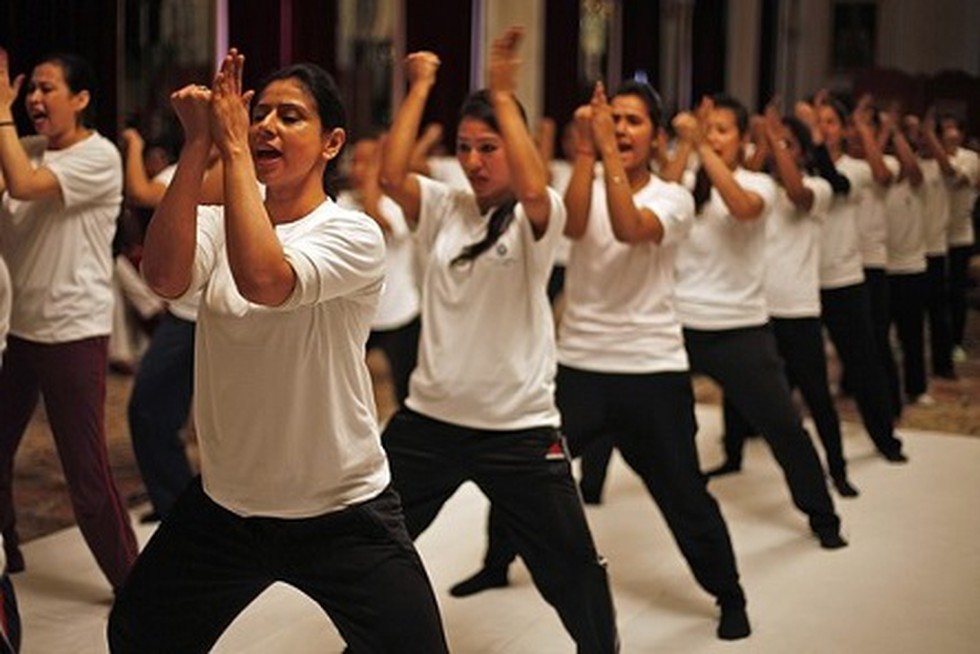 A women friendly collaborative initiative organized by the Kolkata Book Fair saw two associations, ‘Sukanya’ and ‘Saanjhbaati’ come together on one stage at Mukta Mancha on the 30th of January. While ‘Sukanya’ teaches self-defence tactics to women, ‘Saanjhbaati’ is for the welfare of elderly women, both being under the Biddhanagar Police Commissionerate. One part of the programme was meant to bring forward the importance of self-defence for women across all age groups, with some performing techniques on stage learnt in about 12 classes. Elderly women of ‘Saanjhbaati’ performed on stage with the harmonium and other recited poetry.

Each Commissionerate started the associations separately under the same name ‘Sukanya’. ‘Sukanya’ was all about bringing free self-defence training to all the school and college girls in the city. Bidhannagar Police Commisionerate took a step further and opened the course to women of all ages. “It is a three-month awareness program free of cost and the training is done once a week at the Salt Lake stadium in the police gym. After this program, if somebody wants to train they can continue with us.” Said Partha Sarkar, the mentor of Sukanya.

“What we tend to achieve through ‘Sukanya’ is not to make them experts in 20-40 classes as that is not possible. We make them believe that this exists and can be made possible by them.” Added Sarkar. There is a very real chance and opportunity for them to learn self-defence techniques at affordable prices, in this case, it is free. Once the program is done these women, they can enroll themselves in various martial arts programs to develop their skillset and hone their craft.

‘Sukanya’ is funded by the State government entirely. Initially there were around 30-35 schools and over the years it has grown to 112 schools in Kolkata alone and other areas have been added. In total there are around 200 schools in the program right now. The plan is to implement this throughout West Bengal but that hasn’t happened yet. It is in the process.

Most of the elderly women live alone In Bidhannagar and loneliness is a big problem in their age. ‘Saanjhbaati’ which has been running since 2011 but on a small scale, has grown ever since. It boasts of having over 1900 members now. It is for elderly people who are lonely and residing in the Bidhannagar Police Commisionerate area. They either live alone or with their spouse though their children are not with them.

“We provide some programs like various meet-ups like the Bijoy Sammilani. We also observe a large event for them on the International Day for older persons which is being done since the past two years. The turnout was huge for both the years with around 500 people participating in the event.” Anuradha Mondal, ADCP of Biddhannagar Police Commisionerate who also hosted the event.

A 24 hours control room was set up for them as well to call any time for any enquires or complains about issues they might be facing. Along with this, there is a free ambulance service as well.

There is a system to enrol at ‘Saanjhbaati’. A nodal officer is assigned to every police station, who takes care of these things along with two volunteers to help out. We also have an office which some members visit as well. We are taking of older people, looking out for them during their twilight-years so the isolation doesn’t get the best of them.