Women’s World Cup: India lose a thriller to crash out 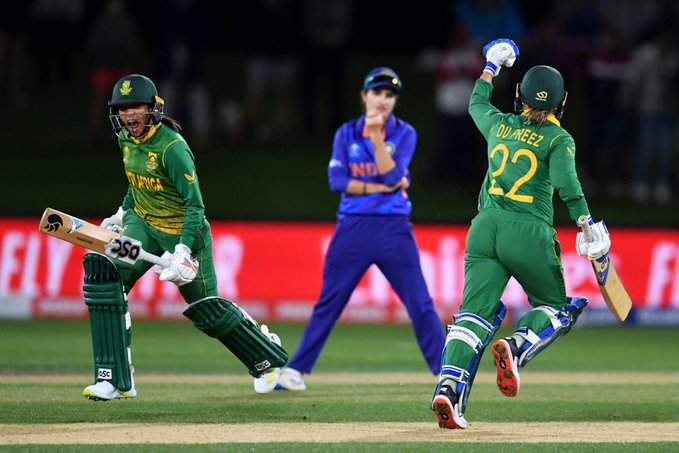 Christchurch: India’s ICC Women’s Cricket World Cup 2022 campaign came to an end after the Mithali Raj-led side lost a thriller against South Africa at the Hagley Oval by three wickets on Sunday. For India, it was a must-win league clash that went down the wire, with the Women in Blue needing to save six runs in the final over.

Mithali trusted the death-over expert Deepti Sharma. The off-spinner had almost got Mignon du Preez (52 not out) who holed out to long-on but the umpire signalled no-ball. Du Preez then comfortably took South Africa over the line with a single.

Defending 275 for a place in the semi-finals, India got an early breakthrough as Lizelle Lee (6) fell short to Harmanpreet Kaur’s direct hit. But soon India found themselves in a spot of bother.

Opener Laura Wolvaardt and No.3 Lara Goodall kept South Africa’s chase on track. Wolvaardt was the aggressive one among the two, scoring boundaries regularly to take pressure off the Proteas in the powerplay. Goodall, who mostly played second fiddle, too started replying in fours after the fielding restrictions were lifted.

The duo formed a solid 125-run partnership for the second wicket. Just when it seemed the game was slipping out of India’s hand, Goodall (49) was stumped off the bowling of Rajeshwari Gayakwad.

With the ball turning, Harmanpreet, who had not bowled in the tournament up till now, was handed the ball and the off-spinner castled Wolvaardt for a well-made 80 off 79 balls. The quick dismissals opened the match for India.

Sune Luus and du Preez found themselves in the middle as two new batters. The duo added 37 runs together before Harmanpreet struck for a second time, this time removing Luus lbw for 22. Marizanne Kapp, who has been South Africa’s match-winner on multiple occasions, chipped in and scored 32.

However, wicket-keeper Richa Ghosh and Harmanpreet combined and run out Kapp, to keep India’s hopes alive. Chloe Tryon (17 off 9 balls), however, had other plans. The big-hitter smashed three boundaries off Gayakwad. The left-arm spinner ended Tryon’s stay as she caught and bowled her.

Earlier in the day, Smriti Mandhana, Mithali and Shafali Verma scored fifties to help India post 274/7. Openers Verma (53) and Mandhana (71) made their intentions clear early on after India elected to bat. The duo found boundaries with ease as Verma took on Shabnim Ismail for three consecutive fours.

The pair stitched a solid 91-run opening stand before a miscommunication resulted in an unfortunate mix-up in the middle and Verma was run out. South Africa bagged another wicket as incoming Yastika Bhatia (2) played what was set to be a legside wide on to her stumps off the bowling of Chloe Tryon.

Mandhana and Mithali got into rebuilding, adding 82 runs together for the third wicket. Just when India were cruising to the 200-run mark, Mandhana miscued one off Masabata Klaas and gave a catch at mid-off.

With the pressure building on India in their do-or-die match, Mithali (68) anchored India’s innings. Along the way, she became the second highest run-getter in World Cups. Klaas struck again and this time bagged the prized wicket of India skipper, who was caught at mid-off by Tryon. Towards the end, Harmanpreet’s (48) late hitting took India to a competitive total.