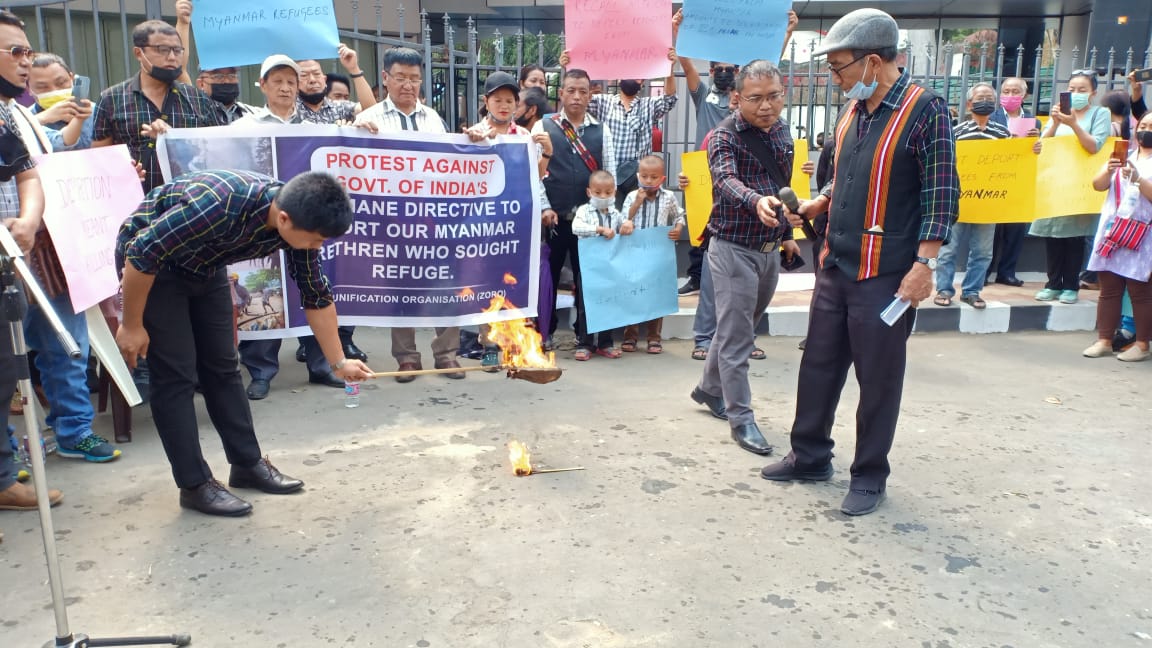 The Zo Reunification Organization (ZORO) held a sit in protest at Aizawl centre against the Ministry of Home Affairs’ letter that orders the repatriation of Myanmar refugees in the North Eastern states of India.

At the protest, ZORO burnt the letter of MHA sent to Chief Secretaries of Mizoram, Manipur, Nagaland, Arunachal Pradesh and the DG of Assam Rifles that ordered for the immediate deportation of Myanmar Refugees.

ZORO finds this action of the Ministry of Home Affairs inhumane and untenable. They stated that they shall extend all possible assistance and protection to Myanmar nationals as they consider them family and not as illegal refugees.

ZORO demands that the Government of India should give refugee status to Myanmar nationals who have crossed over to India to escape Myanmar military junta’s brutalities.

There has been an influx of refugees in Mizoram ever since the military seized power in Myanmar in February. Notably, there exists a 510 km long porous border between Mizoram and Myanmar’s Chin state. Also majority of the Myanmarese nationals taking refuge in the state belong to the Chin, and belong to the Zo, community. Interestingly, their ancestry and cultural practices are largely similar to that of the Mizos of Mizoram.

“Thousands of people from Bangladesh and other countries have illegally migrated to India in the past. The Central government accepted them as refugees and provided them with asylum. But now it has instructed the four Border States to identify and deport the Myanmarese nationals who have taken refuge in the country,” said the ZORO president R. Sangkawia during addressing demonstrators and also alleged that the Centre is discriminating against the Zo community people.

According to Sangkawia, nearly 750 people from Myanmar have crossed the international border and entered Mizoram to take refuge. It is pertinent to note that earlier, the ZORO had also urged the Center to impose sanctions on the military junta-led government of Myanmar.