The girl with a golden foot- Sunita Sarkar 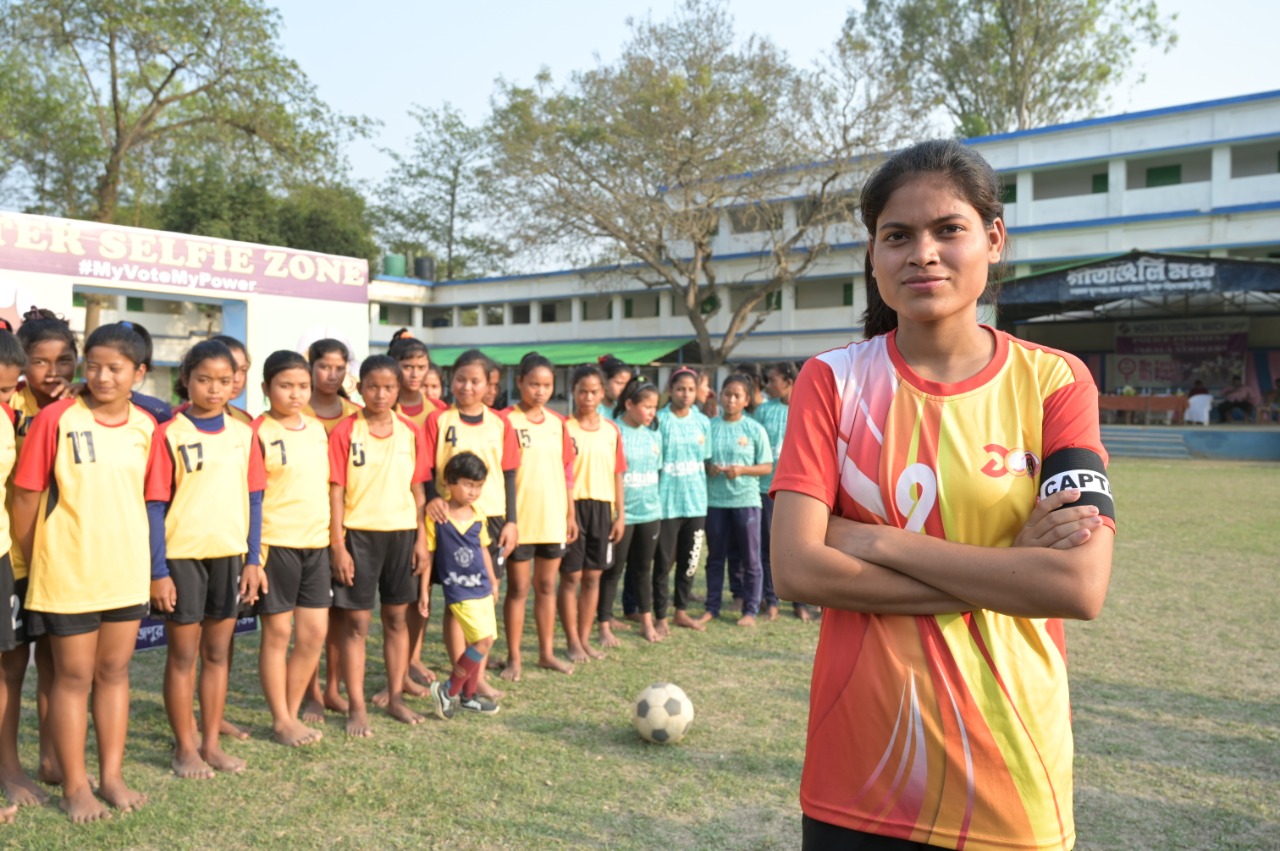 Sunita Sarkar, captain of East Bengal Women’s Football team, hails from Sarala, a village in Kushmandi block of Dakshin Dinajpur district of West Bengal. An alumna of Sarala Bhupendra Nath Sarkar High School, Kushmandi, Sunita’s journey with real football started in 2011 when she was selected for the school football team.

Sunita has always been an athlete and started playing at the national level in 2012 when she took part in  national meet in Odisha. In 2013, she played at the state level at Barasat. She got selected for the Indian Under 14 Women’s National Team in 2014 along with Pampa Mahato who hails from Dakshin Dinajpur as well. From there she went to Kochi in Kerala to practice for AFC U14 Girls Regional Championship, which was held in Sri Lanka. There she played against Bhutan, Nepal, Iran, Tajikistan and host, Sri Lanka and India secured second position in the tournament.

“When I play wearing the jersey of the Indian team it is a different feeling altogether. I feel motivated to prove myself on the field and contribute to the pride of my nation,” said Sunita Sarkar.

While playing, the cheer and encouragement from the audience keeps her spirits high and boosts her performance. As a captain Sunita Sarkar always motivates her teammates to give their best. “It is not possible for every player to play at a consistent level on all days. So even if 9 out of 11 players give their cent percentage to the game it helps us a lot.”

Under her captaincy, East Bengal FC had put up an outstanding performance at the Calcutta Women’s Football League 2020 popularly known as the Kanyashree Cup. On February 13, 2020, the team had scored 18-0 against Biddyut Sporting within 30 minutes of the game. They had also scored 20 goals against Bhangore SWF on March 6, 2020. East Bengal FC played against SSB Women’s in the finals and finished as runner up in the tournament. “Our coach, my teammates, every member of my club had supported us, which helped us reach the finals. We are thankful to all of them,” said Sunita. East Bengal FC has also qualified for the Indian Women’s League to be held at Odisha.

The pandemic and the subsequent lockdown have led to cancellation of all sporting events including football, on account of social distancing norms. “Our Kanyashree tournament had to be postponed last March, and we could not practice on field due to lockdown. However, things are getting back to normal and our matches have resumed since November,” said Sunita Sarkar.

Apart from support from her school teachers and coach, Sunita’s parents who are into agriculture, have also been her pillar of strength throughout her journey. She lives with her parents and her elder brother. “They have made it possible for me,” she said.

Her favorite player is Anirudh Thapa who plays for Chennaaiyin, she likes Cristiano Ronaldo and supports Barcelona.

Not everyone is accustomed to the idea of girls playing football. However Sunita Sarkar said, “Stereotypes are now changing and people have come to terms with the fact that women should be on equal footing with men. It is good to see that in sports the support levels are increasingly. Playing keeps us physically active and boosts our concentration as well. These days, being engaged in sports has opened a lot of opportunities as well. So girls willing to play should practice hard,” shared the soccer star.

Sunita Sarkar is also the District Icon of Dakshin Dinajpur and motivates local youths to vote in the upcoming State Assembly elections. “Elections are a vital component of our democracy and future. Everyone should vote independently without any pressure,” she advocated.

Presently Sunita Sarkar is an undergraduate student of Physical Education at Charuchandra College, Kolkata, under Calcutta University. She aims to play for the Indian national football team in times to come