Dr. Hari Om- An IAS who wears a motley hat 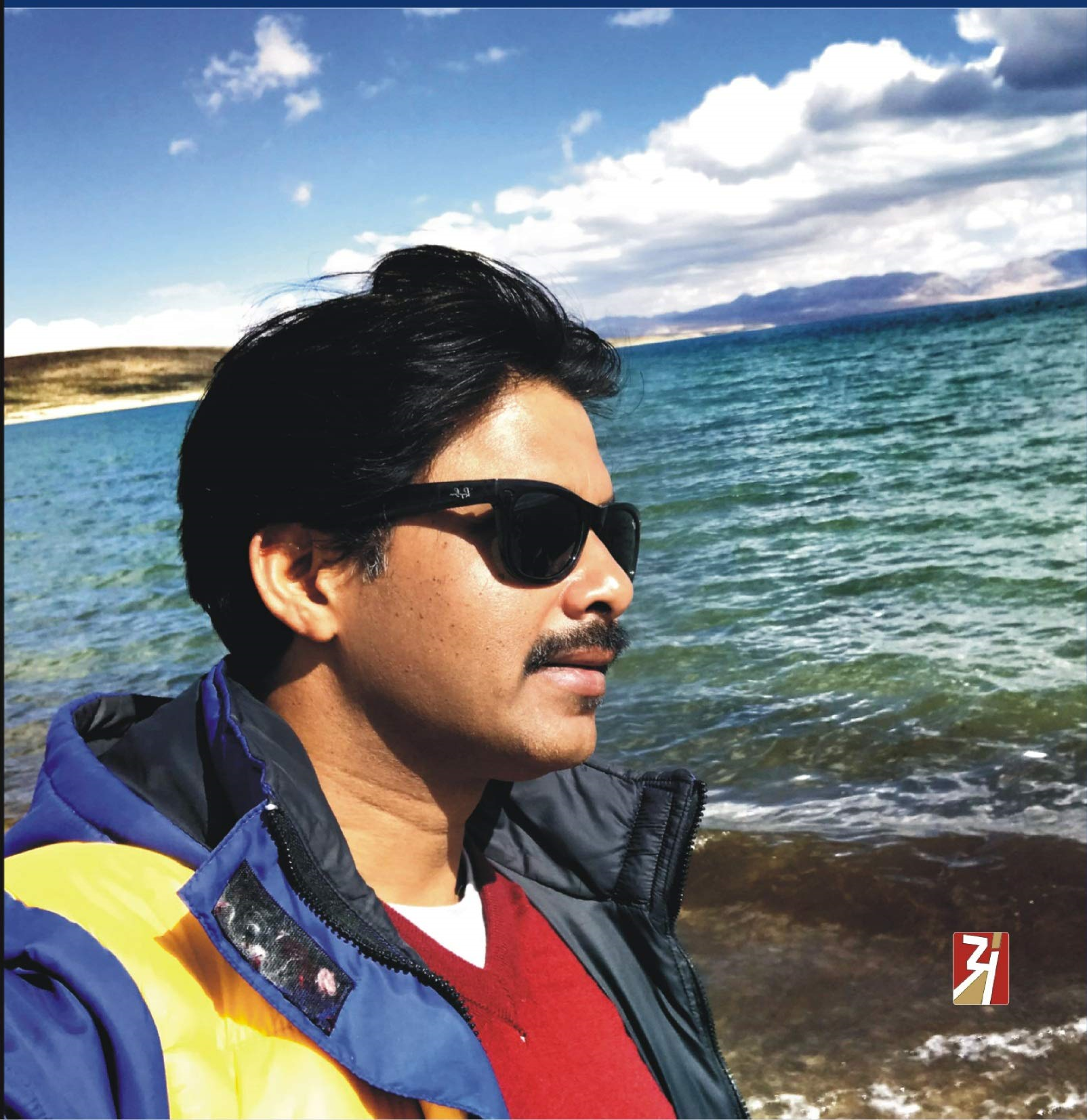 The demanding job of a civil servant in India hardly leaves any time for anything else. But, there will always be the exceptional souls who will defy every rule. Meet Dr. Hari Om, a 1997 batch IAS officer from UP cadre who besides serving as a Secretary to the Government of UP, is a prolific singer trained in ghazals, a music composer, writer, poet and an inveterate traveler.

Dr. Hari Om IAS who hails from a small village of Amethi district in UP, was serious in his studies. “Since I come from a rural background most of the students never knew about the administrative system. Nobody knew who an IAS officer was. Sometimes my father used to talk about somebody called a Collector in the district,” he shared.

Dr. Hari Om had studied up to class 12 in his village. After standard 8 he opted for the humanities. “My elder brother was studying science. I was reluctant to read the science subjects though I was quite bright as a student,” he informed.

“In those times there was a prevalent thought in the society that science students would be doctor or engineer and the Arts students become officers. My father used to motivate me to try for IAS and PCS.  But I was only trying to be a good student. My teachers used to say that I am a bright student and I have the potential to crack civil service exams,” he shared.

When Dr. Hari Om went to study at Allahabad University the academic atmosphere had an impact on him. Most of his fellow mates used to talk about IAS and PCS. “At that time I was just focusing on getting first division marks. However, seeing some of the students appearing for the exam I started thinking about the Service and what would be the subjects I should study. I bought books of my favourite subjects and started reading and thinking about becoming an IAS,” he said.

Initially Dr. Hari Om studied Ancient History, and then shifted to Political Science and Hindi Literature in his final year.

After completing his graduation Dr. Hari Om moved to Jawaharlal Nehru University in 1992. “There the students were more serious about IAS. Being in Delhi one could get all the guidance that is required for the examination.” It was at this juncture that Dr Hari Om took a firm decision to crack the civil service exam. His journey from his village to Delhi gave shape to his dream to become an IAS officer.

The open-minded peaceful atmosphere at JNU had played a role in shaping his views. “In JNU we had a democratic process of studying. Teachers used to encourage us to discuss and debate and present our own viewpoint. The control of the administration in the university was minimal. Even the elections were conducted by a committee formed by the students. Students used to share cordial relations with one another. There was no imposed and enforced discipline. JNU being a residential campus, students used to meet frequently. We did not restrict ourselves to the syllabus. We used to attend seminars, discussions, used to listen to experts who used to visit the campus; students would even invite anyone doing something significant in the country to have a chat in the mess,” he shared.

This liberal atmosphere expanded Dr. Hari Om’s horizons. Along with other students he started thinking about the country, the society, gender discrimination, injustice and used to participate in debates and discussions. “Anything significant happening in the country or the world would find a place in our discussions. The lively and vibrant campus changed our outlook, our perception about the society, our country, our government, and the happenings around the world and played a significant role in shaping my personality.”

Dr Hari Om IAS completed his post-graduation in Hindi literature and did his doctorate in Hindi Literature from JNU. After joining service, he did a Masters in Public Policy from Netherlands as well.

Dr. Hari Om IAS used to write poems in his diaries since his college days and also contributed to the annual magazine. However, he started to take writing seriously when he joined service.

His first book, Dhoop Ka Parcham which is a collection of Ghazals was published in 2002.

“Being a student of Hindi Literature I was largely acquainted Hindi poetry but Urdu poetry was my favorite. Since I used to hum and loved listening to Ghazals, the genre of Urdu poetry attracted me more. So when I started writing couplets I started with writing ghazals,” he shared.

After coming into service Dr. Hari Om got the opportunity to travel extensively. During elections he used to be away for weeks. This gave him the scope to meet people, get acquainted with diverse surroundings, talk to various people and try different cuisines. Even his memories from village and his rural background influenced him as a writer. Soon he started writing fiction as well. His second book, Amreeka Meri Jaan is a collection of stories.

His latest book Kailash Mansarovar Yatra is a travelogue about his journey to the majestic Kailash Mountains in the Himalayas.

The officer with a melodious voice

It might surprise many to know that Dr. Hari Om IAS is known for his songs and beautiful compositions as well. He has released several albums like Roshni Ke Pankh, Gulmohar, Mehfil Mehfil and many others.

“I used to hum in my student life. I was interested in local forms of music. People used to encourage me to sing in college and I was happy to hum the popular film songs whenever I got the chance. At times I used to sing Pankaj Udas, Jagjit Singh and Ghulam Ali Mehta,” he shared.

After being an IAS officer Dr. Hari Om used to sing occasionally in parties and private gatherings. However in 2015 when he got posted as the Secretary he got trained in classical music and started regular riyaaz.

In 2016 he staged his first public performance as an artist and released his music album, Roshni ke Pankh which became an instant hit. The album is based on his own poetry. The ghazals were written and sung by Dr. Hari Om himself and one of them contained the immortal line: “Main tere pyar ka mara hua hun, sikandar hun magar hara hoon.”

Prior to that Dr. Hari Om had released another album based on Faiz Ahmad Faiz poetry named Intisaab.

It is commonly believed that the coveted Service demands officers to devote all their time to their profession. However Dr Hari Om IAS debunks this myth head-on.

“The Service keeps one engaged while working on the field. In the first 15 years of my service when I was serving as Collector I was occupied in fieldwork. However, even in those times I used to read and write in my leisure. Being a student of literature I had a vast exposure to good books which gave me ideas,” Dr Hari Om said.

“When you have ideas, thoughts, emotions you construct it in your mind and whenever you get time you write it down and start compiling them. However, you need to devote a lot of time while writing fiction. You need to develop the characters; feel the pain and the circumstances. That entails a lot of focused writing,” he explained the process.

“I used to manage time and write down whenever I could especially when I was travelling and also on weekends,” he shared. Dr Hari Om had served as District Magistrate in many districts including Allahabad, Gorakhpur and Fatehpur.

Dr. Hari Om IAS started singing after his field service came to an end. “Singing needs regular riyaaz. So I practice classical music before 10am in the morning and after 6pm in the evening.”

Dr. Hari Om’s recently published book, Kailash Mansarovar Yatra, is much more than a trip to a holy shrine. Apart from the religious and devotional aspect of Kailash he has also dealt in detail about the social, political, economic and diplomatic aspects he encountered during the journey.

The subtitle to his book, Astha ke Vaichik Ayam signifies the different dimensions of faith.  “Any rational human being would not visit Kailash with the only objective to reach the holy shrine and come back. I went to Kailash with an open mind to learn from my journey,” Dr. Hari Om said.

“During my journey I interacted with my fellow travelers and learnt from the stories they shared. We developed interpersonal relations during the journey. Each of us shared a lot about our lives. I learnt how the guides manage their trips from their experience. I came to know how the locals earn their livelihood, the different socio-economic conditions of Nepal and China, the endurance of the travelers who undergo such difficult journey and reach the shrine despite all possible hurdles minimizing their own needs. I also contemplated on the logic why people visit Kailash despite all the sufferings. I was able to enjoy the bounty of nature, the mountains, and the forests,” he shared.

“Life is a journey with no fixed destination.  Every journey should enrich you and make you humble as a human being. One should always have an open mind without superstitions or preconceived notions about anything. One should be able to connect with people and expand the horizon of one’s thinking to go closer to reality. Follow the path of reason and not blind faith,” he shared the message from his latest book.

If you are wondering how an IAS officer can juggle between so many roles please read Kailash Mansarovar Yatra to understand how Dr. Hari Om IAS perceives life. “IAS should not be a destination for anyone but a means to serve humanity,” he concluded.